This page takes a detailed look at Roles.

Role is a Role Type that specifies the scope of access to resources as shown below and the organization (project or project group) to which the authority is applied. is composed. Users can define access rights within each SpaceONE through RoleBinding. 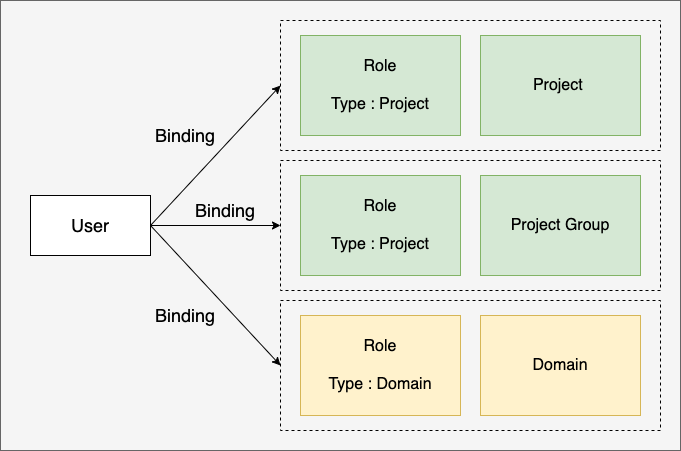 Role Type specifies the range of accessible resources within the domain.

Please refer to Add as Project Member for how to add a member as a member in the project.

All resources in SpaceONE are hierarchically managed as follows. The administrator of the domain can manage so that users can access resources within the project by adding members to each project. Users who need access to multiple projects can access all projects belonging to the lower hierarchy by adding them to the parent project group as a member. For how to add as a member of the Project Group, refer to Add as a Member of Project Group.

If a user have complex Rolebinding within the hierarchical project structure. Role is applied according to the following rules.

For example, as shown in the figure below, the user stark@example.com is bound to the parent Project Group as Project Admin Role, and the lower level project is **APAC. When it is bound to Project Viewer Role in ** Roles for each project are applied in the following way.

All SpaceOne domains automatically include Default Role when created. Below is the list.

Roles can be managed by the domain itself through spacectl. Please refer to the Managing Roles document.